This is the first in a series of blog posts looking at current on-pack SMS based promotions. Casting a critical eye, from the consumer’s perspective, campaigns will be rated on a number of factors such as ease of entry, clarity of instructions, creative impact.
The problem we’ve found with most on pack SMS based promotions is that there are so many agencies involved that no one is in overall charge of how the whole thing will come across to the consumer. We have looked at 3 SMS campaigns in the past, 2 from Coke and 1 from Volvo, so the idea here is to bring a bit of structure to the criticism.
So first under the spotlight comes 7UP with their recent campaign, giving customers the chance to win a series of excellent prizes, including a snorkelling trip to Barbados.

This is much stronger than the average on-pack text to win competition. The potential prizes on offer are clear and they have a broad appeal which should attract a wide target audience. Usually the creative is restricted to a ridiculously small corner of the packaging but the promoters have been brave enough to make the positioning large and clear.

It’s always a surprise how poor these often are and sadly this campaign is no exception. On the main panel, it doesn’t actually tell you what to do next. You might expect the instructions to say something along the lines of, ‘To enter, text the code on reverse of this wrapper to 88802.’ But no, not a thing, you have to assume that they’ll be something if you can wrestle the wrapper off the bottle. Disappointing.

Entry to the text to win competition is easy enough. The code itself is large and legible. My only minor grumble would be that the code is 11 characters long. This is excessive; it only needs to be 7 or 8 characters to derive billions of possible combinations.

A bit of a poor automated response that came back to after a few seconds.
“You’re entered into the final draw to win £1000 – we’ll let you know after 21.11.2001 if you’ve won.”
What about the snorkelling holiday? There was no mention of a £1000 prize. Was something missed? No, but campaign had actually finished and a local Tesco was still stocking the old bottles. So this short code must be being used for an entirely different SMS campaign. They should really have returned a message stating that the competition had ended. 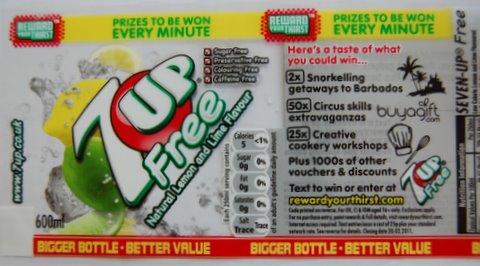 7Up score good points on this SMS promotion by keeping the on pack terms and conditions to a reasonable length. They undo all the good work however by charging 25 pence to enter the SMS competition. This is a bit sneaky frankly. It feels like the bad old days of the crazy frog ringtone era. Baffling as to why big brands do this; just because it’s possible to charge for entry to the competition it doesn’t mean it’s a good idea. The cost is inevitably buried in the terms and conditions and most people wouldn’t have had a clue that they were being charged to enter. The argument goes that you charge the consumer to help ‘offset’ the costs of the competition.

Some really strong elements to this SMS campaign but it’s let down by a couple of absolute howlers, namely charging 25 pence and failing to tell consumers how to enter.