We wish you all a very Merry October

We wish you all a very Merry October 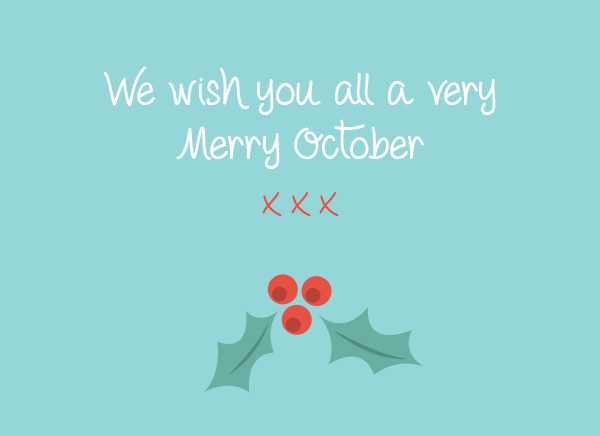 Yes you guessed it, this post does have some connections to Christmas but don’t worry. Throughout this post we’ll try to refrain from referring to the Merry word. Much like you we’re sure, it’s way too early to break out the ‘C word’
However around the office we are starting to hear slight murmurs of the ‘C word’. A colleague in the office said upon visiting his little nephews last week, that every single advert that came on the television was greeted with “I would like that for Christmas” or “Daddy can I add that to my Santa list”
This is a story that we are sure most of your are familiar with, and you have probably been playing the “I am going to call Santa” card when they play up for a while now – if not we recommend it highly.
While early festive talk like the above is often reserved for the kids, it seems that many adults are now planning our gift lists, sourcing the best deals and getting ready for the festive period. While you may not be talking about it yet, you’re thinking about it, whether it’s a way to spread the cost or simply beat the queues.
Online retailer Ocado has already released their festive food delivery dates with spaces for ordering and booking food deliveries starting as early as October 8th. Waitrose has also said they will be opening festive booking planners from October 15th.
According to research published by the Daily Mail, October 24th is now our favourite day to start hitting the shops before December, with 41% of Britons starting their Christmas shopping on and around that date.
Across the pond there seems to be even more October spending happening, with Oracle Marketing Cloud and Edison research stating that the majority of Americans get their festive shopping done in October.
The month of November of course brings with it the anticipation of offers for Black Friday, which last year saw British pre-Christmas shoppers spend an estimated £810 billion online (IMRG). It seems the last Friday of November can bring everything and more for both retailers and shoppers with a boost to end of month profits and great savings on presents to put under the tree.
It is estimated that 44% of shoppers used a smartphone to make a purchase during the Christmas shopping season last year, however this year has seen M-commerce grow even stronger and more popular, so many predict that number to be even higher this season.
They say Christmas gets earlier each year, so make sure you’re appealing to that eager customer who is always on the hunt for those early holiday deals.
Orange maybe the new black, and it seems October is the new December.